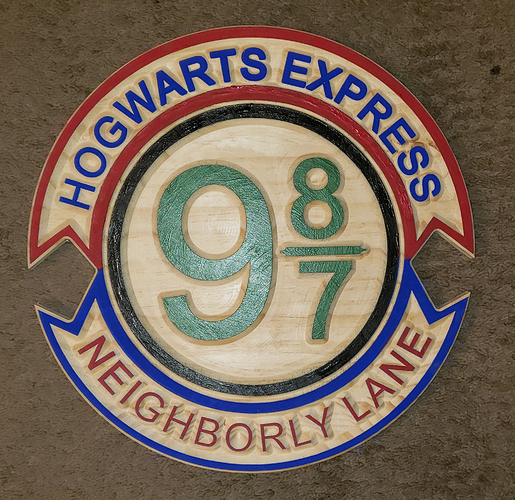 2020-12-16-Hogwarts Express-Joyce Helene Schildhouse-Address Plaque-2221432052×1992 1.31 MB
Joyce, my Wife, is really into Harry Potter and Hogwarts. Princess Lilli the Bean of Candyland, our only grandchild, and I are really into trains. And the Hogwarts Express plays a role at numerous times in the movie series. So… CNC with Vectric VCarve Pro to the rescue. This 15 3/4" diameter plaque took about 5 1/2 hours of milling time with four bit changes. It was “prepainted” with acrylic paint on clear 1" x 4" pine. Now it will receive several coats of clear spar varnish.

There are some things I cannot explain. I was having issues with inconsistent depth cuts with my Shapeoko XXL, Vectric VCarve Pro, and my computer. Yes, all the belts were at the proper tension. I upgraded the XXL to the Z leadscrew system and updated the software. This is the first project and the depth is correct. Vectric’s technical support never really answered a question, they did continue to ask the same questions over and over again and ask for the files involved over and over and over again. And in response to the submission of the files, they would …… ask for the files again.

cool plaque and bummer on the vcarve issues.

I’m glad that the leadscrew system resolved the depth issue for you. I definitely saw the same issue on the Shapeoko at the member shop. I saw it only on the smaller machine, not on the XXL. Fortunately, early on it was on test runs, and later I was looking for it and caught it in time - on an earlier clearing run before it did damage. Thanks to your discussion, I was looking for it. It tended to happen when I was pushing the timing a bit - maybe plunging too fast or not ramping in.

The shop routers have also been upgraded with the leadscrew, so I hope the problem is eliminated there also. After this discovery and our earlier theories, I am now leaning on the idea that the stepper motor misses steps when pushed too hard. The leadscrew approach most likely has both a better mechanical advantage (ratio of motor turns to change in Z) and lower friction. Still just a theory, but let’s hope that with the leadscrews the issue is behind us.

Now we have to survive the pandemic and get the shop open again, or I have to find the room in my shop and funds in my wallet to buy my own CNC.

Doug,
It is our address - 987 Neighborly Lane.
Thanks,
Rex

Joyce objected to the full color Hogwarts Address Plaque going outside. So, with some scrap redwood 2x12s, a new one was made. When I went to add color, the world is a bit bland, I got additional objections. “MAKE THE LETTERING BLACK.”
Okay. (I think it is too dark. However, I would like dinner tonight. So…)
Hung with eye bolts in the edges and additional eye bolts in the back as safety chains. 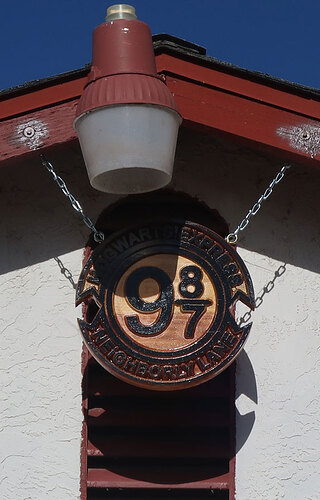 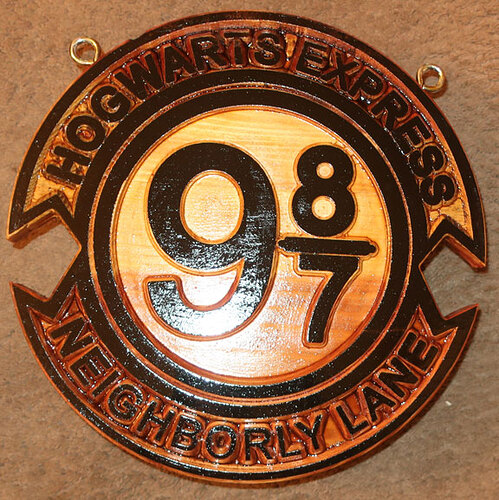